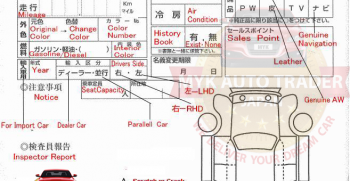 As the locally made cars have become very expensive and many people cannot afford these vehicles, so the demand of Japanese used cars has been increased in Pakistan. Although, these imported vehicles are considered on a large scale, but most of us do not know the actual condition. The only option to know the actual position is the auction sheet, but the issue is that we do not know how to read this autopsy report although it tells the complete information of a Japanese used car.

The auction sheet provides the complete information of the imported car and if you can read it, you will get a clear picture of it. But the issue is that we never tried to read it. To help you in this regard, we are going to give a detailed information on the auction sheet so you will be able to understand it before buying a Japanese used car from the Pakistani market.

The most important item on the auction sheet which must be considered in any case is the grading related to interior and exterior condition. When we talk about the exterior, our recommendation is to find those vehicles which have grade four or more. For the interior condition, it must be B or A. below these numbers, heavy modification has been made in the vehicle which means that you are going to bear heavy maintenance charges in the future.

The best exterior grade is S which means that the car is almost new and has the mileage less than 5000 kilometers. After S, there are 5, 4.5, 4, 3.5, 3, 2, 1, RA/A and R/A respectively, according to the exterior grades when we low down the quality of a Japanese used car. The best interior grades are A and B while C and D are below average.

For rust, S1, S2 and S3 are used while for corrosion, C1, C2 and C3 are used. X is used for those auto spare parts of the Japanese used cars in Pakistan, which are needed to be changed while when there is XX, it means that the parts have been changed. B1, B2 and B3 are for small, medium and large distortion while Y1, Y2 and Y3 are for cracks respectively. For small, medium and large paintwork, P1, P2 and P3 are used.